Only 1 chance for a good start!

The first few weeks of a calf’s life are crucial for its future. With a LifeStart calf rearing program with a higher plane of nutrition during this critical period, dairy calves will not only grow better, resulting in earlier breeding, they will also produce more milk with a reduced risk of culling during 1st and 2nd lactation.

How can a farm improve the life time performance of their cows with the LifeStart program for calves?

Dairy farming can be made more sustainable by producing more milk with less animals. Particularly the number of young-stock per lactating cow should go down. By utilising the full potential of each dairy cow, a farm can maximise the average lifetime daily production of the animal. The aim of each farm should be to: 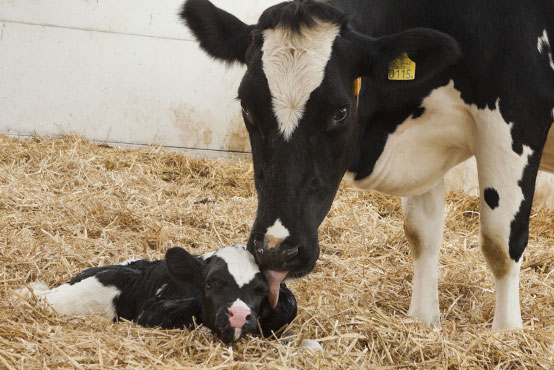 A younger age at first breeding

A lower culling rate during first and second lactation

When you allow yourself a short break, we'll make it worth your while.

At Sprayfo we are committed to transform our insights from global research projects into products and solutions that will continuously improve calf rearing. Register for our quarterly newsletter today and you'll be the first to know!

Thank you for joining, you are almost set...

Great to have you on board. We have just send you an email with a link to confirm your subscription. Once you have confirmed your subscription via this email your registration will be complete.

*You can unsubscribe from our marketing lists at any time via the unsubscribe link at the bottom of our emails. For information about our privacy policy and general terms and agreements, you can click on the appropriate links in the footer of our website.

Go for optimal performance
with a LifeStart feeding programme

Check out each step in which you can influence and optimise the development of your calf.

More about the LifeStart feeding schedule 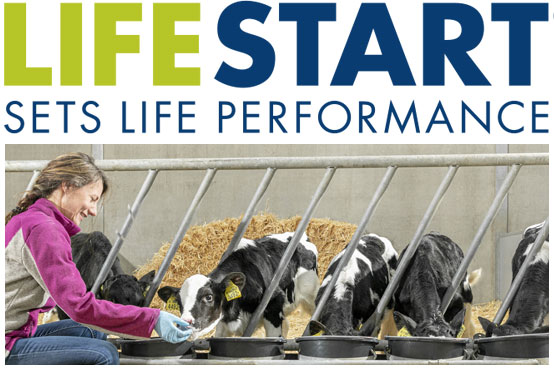 The quality of early life nutrition has a strong influence on gene expression, which in term is an important factor influencing maximum growth and future production potential of dairy calves. LifeStart feeding schedules for calves can result in an increase of average daily gain of up to 300 g/day [1,2,3,4,5,6,7,8,9,10]

Calves in the LifeStart group had a higher bodyweight from day 7 onwards.

more about this? go to LifeStart
*Click to see references

A LifeStart programme can double the amount of udder tissue

The development of udder tissue at a young age is essential for optimal milk production of a cow later in life. Several studies [14,15,16]., including the TN Kempenshof trial[17] resulted in compelling evidence that growth in the first eight weeks of life is a key factor in the optimal development of udder parenchyma that forms the milk producing glands. 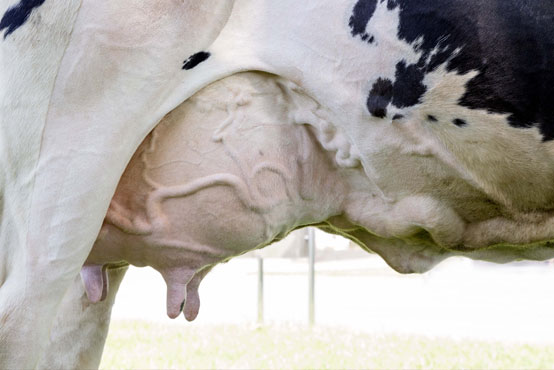 Several authors have shown that calves on LifeStart feeding schedules reach puberty at an earlier age and can be inseminated earlier [6,10,12,13].

Calves in the LifeStart were inseminated earlier and calved at a younger age.

A LifeStart programme will result in
a higher milk production

There is an overwhelming amount of evidence that increased levels of nutrition in dairy calves during the pre-weaning phase lead to an increase of future performance. A LifeStart programme will result in an additional milk production during the first lactation of at least 300 litres.[1,2,,4,5,6,7,8,9,10], but often much more [18].

Graph: Fat and protein corrected milk yield in kg/day in LifeStart heifers compared to controls on a restricted feeding schedule.

A LifeStart programme will reduce the culling rate

A LifeStart feeding schedule can potentially reduce the culling rate in first and second lactation dramatically{2,10]. 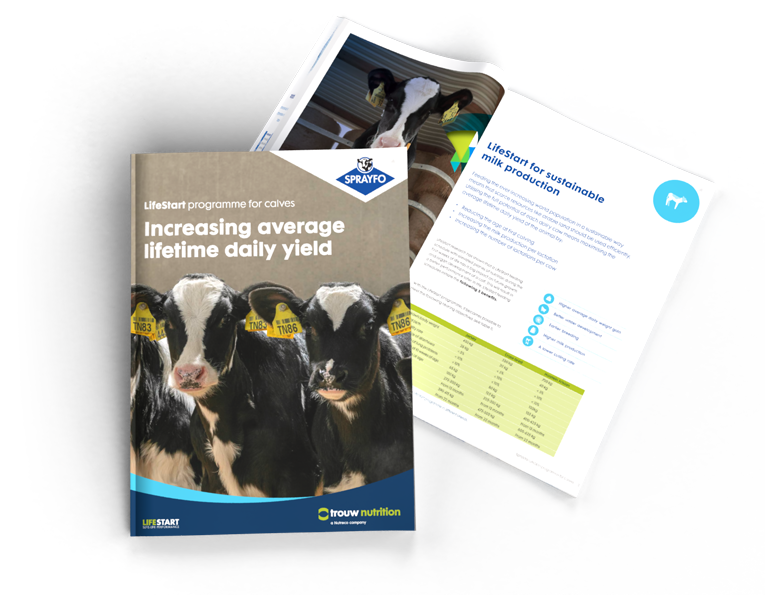 LifeStart research has shown that a LifeStart feeding schedule for dairy calves with elevated planes of nutrition during the first weeks of life has a big impact on future growth and organ development of a dairy calf. This will result in a better performance later in life.

You can access all of our documentation such as the science behind Sprayfo and LifeStart research documents, Sprayfo technical bulletins about various calf diseases and technical product data sheets or feeding schedules.

Thank you for your interest in Sprayfo

We have just sent you an email. Follow the instructions in this email to complete your download. Notice that In some cases, spam filters can block automated emails. If you do not find the email in your inbox, please check your junk email folder.

Have a nice day!

*You can unsubscribe from our marketing lists at any time via the unsubscribe link at the bottom of our emails. For information about our privacy policy and general terms and agreements, you can click on the appropriate links in the footer of our website.

LifeStart research has shown that a LifeStart feeding schedule for dairy calves with elevated planes of nutrition during the first weeks of life has a big impact on future growth and organ development of a dairy calf. This will result in a better performance later in life. 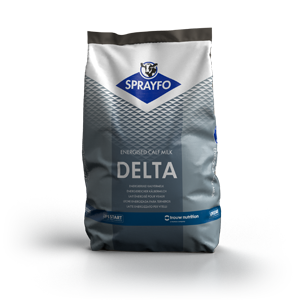 Sprayfo Delta has been developed with whole milk as the biological reference, mixing the best of whole milk with the best of calf milk replacers (CMRs). Inspired by saleable milk, Sprayfo Delta is high in fat, ensuring calves gets a high level of energy. Combined with a perfect balance of vitamins and minerals calves will get the best possible start in life. 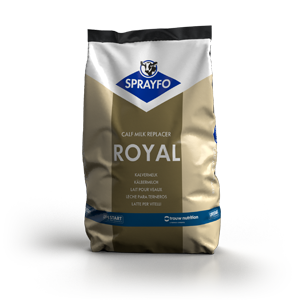 With its superior quality and a milk powder content of 50% Sprayfo Royal is a front-rank LifeStart endorsed calf milk replacer in the market. Sprayfo Royal contributes to problem-free calf rearing: calves will drink it enthusiastically, show optimal health and grow maximally. 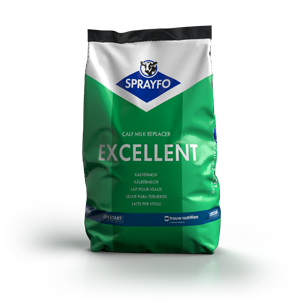 Sprayfo Excellent is a LifeStart endorsed high-quality calf milk replacer for dairy farmers who place the highest demands on their calf rearing. With Sprayfo Excellent you can elevate concentrations to a high level: up to 150 grams per litre of milk. 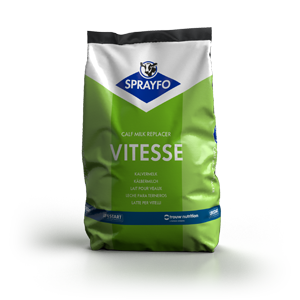 Sprayfo Vitesse is a LifeStart endorsed calf milk replacer for dairy farmers who place the highest demands on their calf rearing. Sprayfo Vitesse is easily digestible and very suitable to elevate concentrations up to 150 grams per litre of milk. 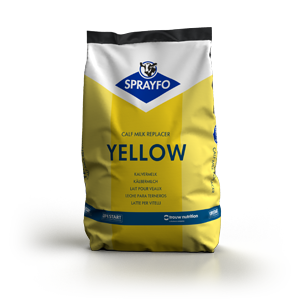 A LifeStart endorsed calf milk replacer for dairy farmers who opt for a familiar and trusted formula. Your step into the professional league of calf rearing. 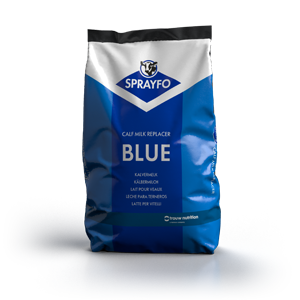 Sprayfo Blue provides a well-balanced blend for proper calf rearing. Sprayfo Blue is based on unique spray-dried whey-fat kernels. Following the Sprayfo feeding and mixing advice your calves will develop well in the first few months. 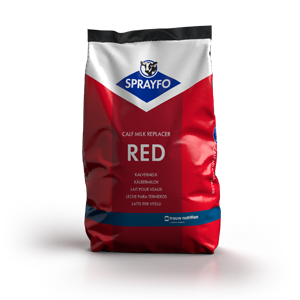 Sprayfo Red is a calf milk replacer for economical and secure calf rearing. Sprayfo Red is very easily dissolved due to the unique spray-drying production process. It can be fed as from day 10 after birth. 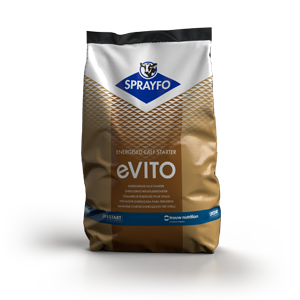 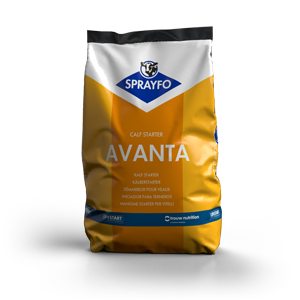 Sprayfo Avanta Calf Starter is based on research and experience resulting in a balanced formulation and when combined with Sprayfo calf milk replacers, Sprayfo Avanta is the basis for the best rumen development for calves in the first months: facilitating trouble free weaning and the best growth up to an age of 4 months. 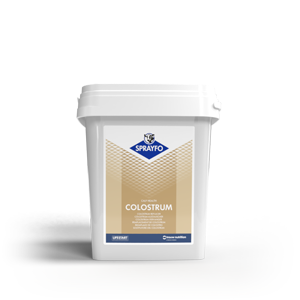 In case of low quality or quantity colostrum on farm, an alternative to natural colostrum can be provided with Sprayfo Colostrum: a feed material perfectly suitable to be provided as a colostrum replacer or supplement for calves. 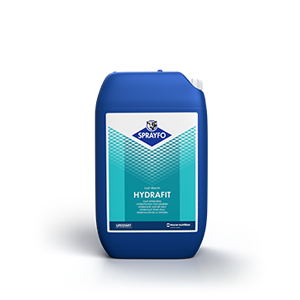 Sprayfo HydraFit is a complementary feed for ruminants that provides the needed salts and sugars in the right amounts and in the correct ratio. HydraFit uses a method with a pending patent that allows for fast intake of water and supply of electrolytes and maintain hydration status. 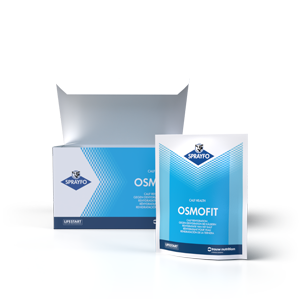 Sprayfo OsmoFit is a dietetic complementary feed for calves, developed to stabilize the water and electrolyte balance to support physiological digestion in case of diarrhoea. This patent pending formula allows for effective recovery and correction of metabolic acidosis.